Written in light of the murder of Rachel Corrie in the West Bank, this play looks at the everyday brutality of twenty-first century Palestine. It follows the friendship that is built up between Rowan, a worker with the International Solidarity Movement and Adham, a Palestinian man who lives in Britain. 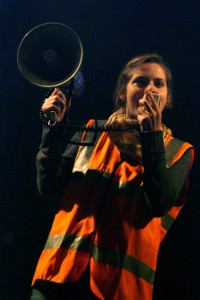 an is travelling across to Palestine to see the situation for herself and asks Adham (though he has changed his name to Ziad) to explain the truth. Eventually he agrees to talk and tells his story. He describes the beauty of Palestine, the smell of the jasmine and the song of the birds. However the story is also filled with death, the destruction of homes, bombings, fear and the dividing of families. Rowan is captivated by Palestine and meets the surviving members of Adham’s family. However, like Rachel Corrie, she is crushed by a bulldozer and her name is added to the list of dead in Palestine.

“THERE is beauty in all things. And to their credit, Theatre Workshop have found a beautiful image to sustain and nourish 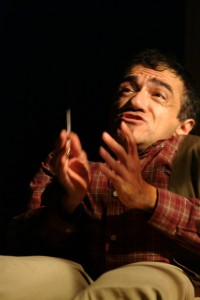 this hard-edged new play. The image is that of its title. A lane on the edge of a town at dusk, lined with white jasmine flowers that glow in the evening light and whose scent lingers over anyone who travels down that path.

The path, however, is in Palestine. The brutal, 21st-century Palestine where the facts of everyday life for ordinary Palestinians have become so horrific that they are all but impossible to comprehend to those who have not been there to witness them.

And just as the play uses beauty to illustrate hideousness, it uses writer’s block to tell its story. The writer is a poet, a man whose clear, simple lines can bring the most difficult subjects to life. And the words he has to write are those of a letter to the parents of a young woman who has died. Not a simple death, however. She has been killed. Crushed beneath a bulldozer driven by a man who knew what he was doing.”  Evening News 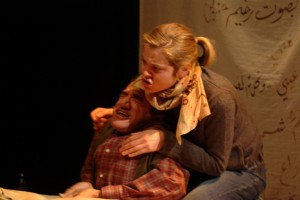 Ghazi Hussein relates, “I could not be silent and see the wrongs, the awful mess around me…I don’t write about politics and governments; I write about my people and their pain” (The Scotsman 9 October 2003).

Corrie Mills says, “Hussein’s poems are unable to prevent the demolition of a house, but they pinch at our numbness and leave a mark” (The List 16-30 October 2003).