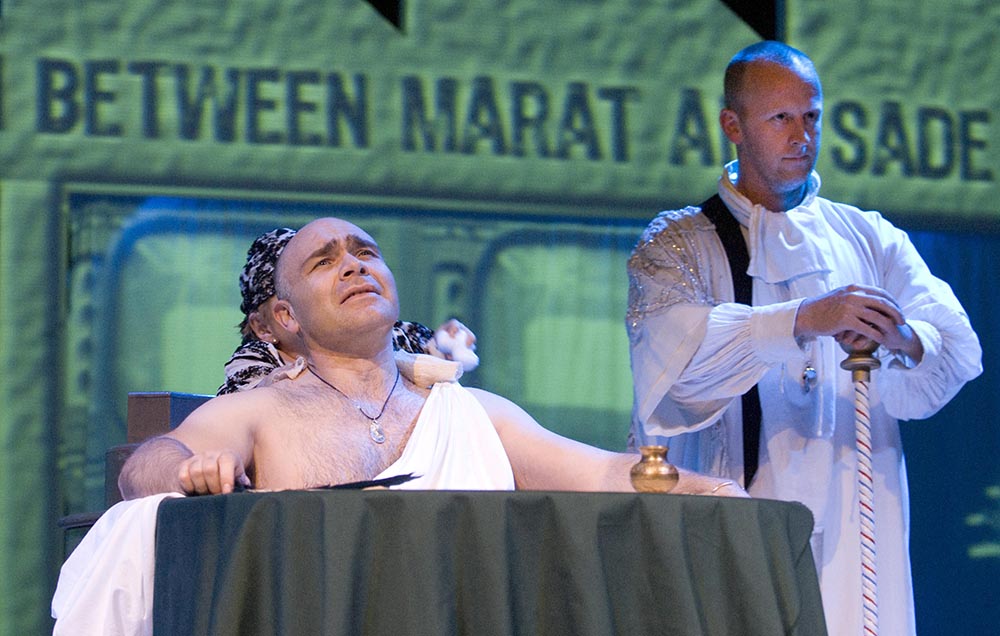 Marat-Sade is a theatrical mediation of history, a comment on the dramatically changing world of the 1960s. Set in post-Revolutionary France the contemporary and the historical intersect. It is a play of philosophical questioning, examining issues of social and sexual freedom and the merits of revolution. A challenging and shocking piece described at the time as “ a hypodermic needle plunged directly into the playgoers’ bloodstream. It hypnotises the eye and bruises the ear. It shreds the nerves; it vivisects the psyche—and it may scare the living daylights out of more than a few playgoers” (The Times 1964).

As relevant today as it has ever been this production is set in that iconic year, 1968, the year of assassinations, war, liberation, most importantly for this play, the May Paris protests. Widespread strikes and unprecedented student protests makes Paris in 1968 the perfect setting for such an explosive production. The production underlines the correlations between 18th Century post-Revolutionary France, the turbulent 1960s and the uncertain times we live in today.

A fine example of Artaud’s ‘Theatre of Cruelty’, Theatre Workshop’s ‘in-yer-face’ interpretation shocked and challenged audiences. With a large cast of some of Britain’s best disabled actors including Nabil Shaban, the production presented  Marat/Sade in all its raw intensity.

An explosive cocktail - a show centred around the clash between de Sade's celebration of no holes barred sexuality and Marat's revolutionary politics  - performed by the largest cast of professional disabled actors ever assembled.


We set the play in Paris in '68 (being the fiftieth anniversary year of the uprising) when radical students  had sat around for days having extraordinarily long political debates before going out, ripping up the streets and bringing down the government.  It all looked and sounded fantastic, brilliant performances and all set against the backdrop of the  cultural and political references of  John McGeogh beautiful and technically sophisticated visuals .

However by the time the extraordinary Nabil Shaban revealed his naked bum to the world to be whipped by his beautiful deaf assistant, some were genuinely shocked -  one critic (Mary Brennan) suggested that I was the one who really needed to be whipped - I guess for being deemed to be irresponsible. The Marat-Sade was always intended as a deeply disturbing show - we wanted to give it back its controversy and honour the radical spirit of Paris '68. We achieved that. Yes it was a risk -  a large group of disabled people  writhing around to Mikey Cameron's raunchy rock n'roll  - but no "stage lunacy" for us as the truth is that disabled people have for generations been locked up in asylums for the crime of expressing their sexuality. The cast relished the opportunity to defy the stereotypes and demand the audience engage with them as sexual beings - all very 1968! 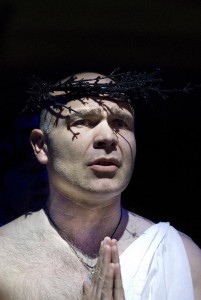