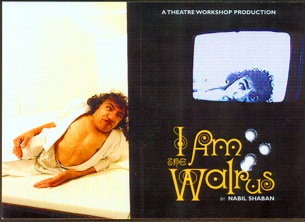 Nabil Shaban’s I AM THE WALRUS, as the title would suggest, takes John Lennon and his music as recurring motifs. It looks at the experiences of two men whose lives become intertwined through the person of John Lennon.

The first character is disabled man, Charlie who lives with his mother and attempts to make sense of his everyday life while enjoying the Beatles’ music. There is a parallel story which looks at the life of Mark Chapman, the man who shot Lennon. Charlie experiences verbal and physical abuse at the hands of his ‘Christian’ mother while Mark Chapman takes great offence at The Beatles’ apparent blasphemy and sees it as a religious duty to stop the music while at the same time idolising his hero, Lennon. For both men their stories end in murder-Charlie kills his mother and, of course, Mark Chapman shoots Lennon.

This is a play that looks at the distortion of religion, individual consciousness, the consequences of our experiences on our psyche and mental health.

“‘I am the Walrus’ is a brutal and disturbing account of mental illness that isn’t scared to be funny and grisly in the same breath,” Jonathan Gibbs, Time Out Written and performed by: Nabil Shaban