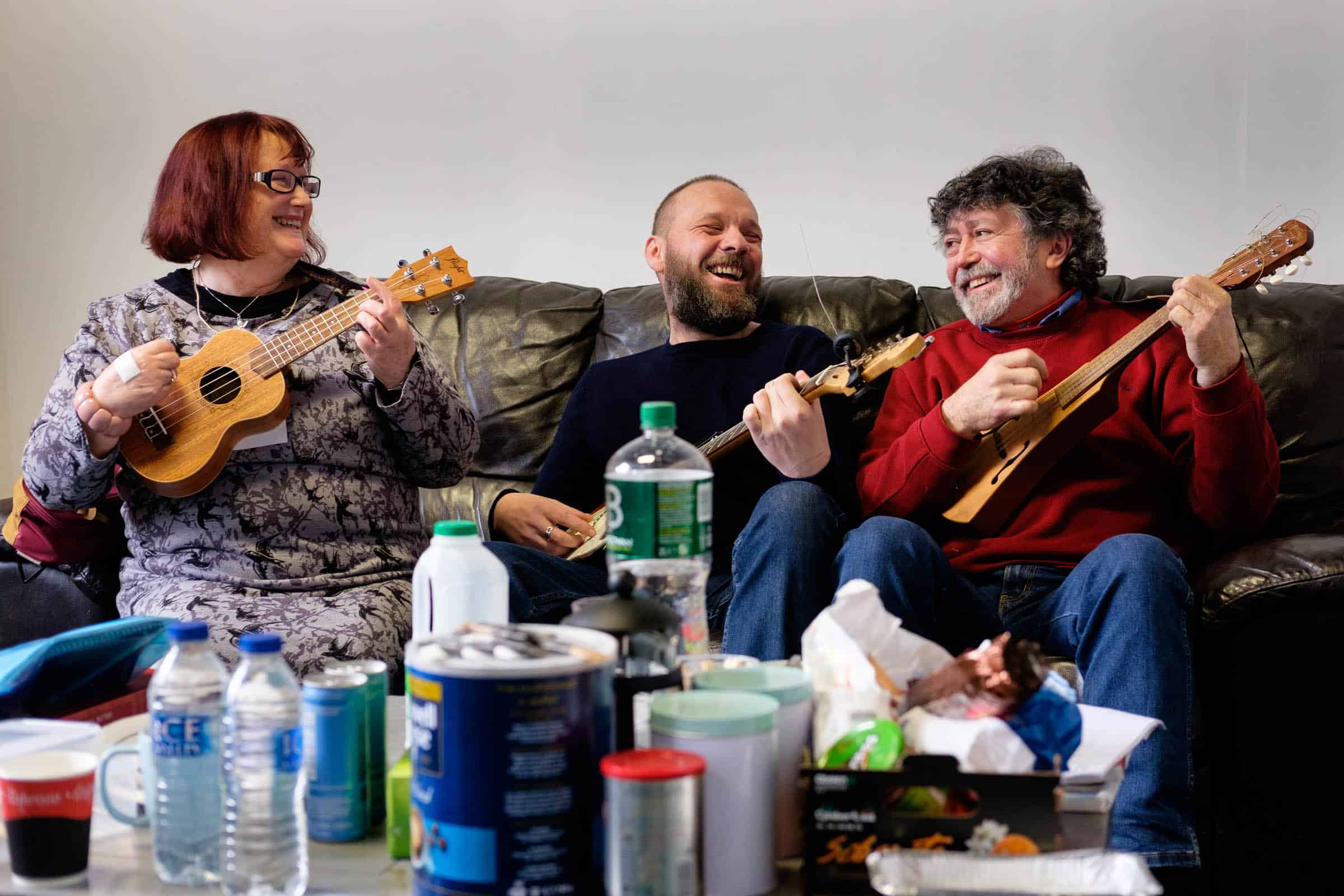 CAROL: What is the original purpose of the Playhouse? Was it to display art or was it to heal?

PAULINE: From the outset it was art, theatre, therapy never really came into it. That’s why theatre directors and writers are asked to create a dramatic piece. The purpose is so that people can empathise that little bit more with the “other”. It was about helping to imbed the peace process by taking stories from victims and survivors or ex-combatants or security forces personnel, individual personal and intimate stories, to help that greater understanding.

ROBERT: It’s not a view I personally hold, otherwise I wouldn’t be here, but some have challenged the Playhouse’s work as exploitative on the basis that we’re creating art out of people’s trauma. Yes, people choose to take part, but does that make it ethical? Carol, putting it bluntly, am I risking re-traumatising people for the sake of art?

CAROL: I don’t think it’s going to really damage anybody, I think it’s probably the contrary, it’s probably helping most of them. Some won’t admit that, they might want to stay in their trauma, but I think it is certainly helpful to them because they’re supported by others in the same boat as themselves, they feel safe in that. I

absolutely think this process will give people more selfworth, the idea of being able to take some control and organise their own story, not all of them need it, but some people who have had a real rough ride and have never had any form of help or anything like that, you know, it offers genuine validation.

PAULINE: Individuals come from all walks of life with their own trauma related to the Troubles and once they start sharing their stories intimately with each other through the writer and the theatre director, they become like a family and support each other. In my experience that doesn’t end when the production ends. They keep those connections and the relationships.

ROBERT: The debate is often framed by ideas of process versus product. From my perspective I aim to produce a good a play while ensuring the process is good for people. We’ve laughed a lot in rehearsal. I’ve taken the time to ensure that everyone is informed and involved in the decision making process, particularly when it comes to their own stories. I’ve encouraged contribution and challenge and taken time to explain how theatre works. It takes patience and experience but it can lead to a strong sense of collective ownership – which paves the way for the important mutual support you both talk about, but it is not only a by-product of good practice, it comes from a strong sense of common purpose, which for me is political, in this case the sentiment “never again”.

PAULINE: The intention has always been to get these stories of hurt and pain and loss and suffering out to the people who could be the potential perpetrators of creating more of that. I mean, with the history of Ireland, the intention is that we do not lose another generation through violent deaths. That has to be politics, democracy and talking to each other, not killing each other. We hear a lot about mental health. The talking therapies apparently work, and theatre is just that. You’re offering an audience this place where the lights are off them and on the stage. People have that space, the security and safety of hearing and speaking the unspeakable, and because it’s their truth and their story who can argue with that?

CAROL: The participants have people in the audience inviting them to tell their story, which is another validation – these people have come to hear me telling my story. Many times, people might begin to tell their story and the person who was receiving it has walked away or just couldn’t tolerate it, they couldn’t bear to see pain in other people, and I think this country is rife with that.

ROBERT: With regard to audiences the Playhouse has in the past offered trained therapists to audiences in case, post-show, anybody needs to talk, can I ask about that?

PAULINE: For me, having counsellors there is a duty of care, it’s like a safety blanket just in case someone does need to talk.

ROBERT: I agree there’s a duty of care to the participants but does that extend to audiences? For example if you put on Oedipus, one of the great archetypal myths, with a really fine actor, would you offer the audience counselling? Is it my job as an artist to build the closure into the work that sends the audience out coping?

PAULINE: But for our work there’s potential victims and survivors sitting in the audience.

ROBERT: Watching Oedipus there may well be people for who that archetypical myth will disturb profoundly.

CAROL: Yes, everybody with an Oedipus complex. It also raises questions about therapy, which for me is a longer- term process.

ROBERT: All good art disturbs or moves its audience at some level. In our social media world where personal stories dominate consciousness, perhaps the authenticity of verbatim theatre, people telling their own stories, still has the ability to get under their skin, and encourages them to
engage with the difficult and the disturbing in society. Isn’t that the purpose at the heart of drama?

PAULINE: In Northern Ireland so many people, so many victims and survivors are still on the search for truth and justice and I would go back to St. John in the Bible, “The truth will set us free”, we shouldn’t fear the truth, that the truth should be welcomed. Our participants have been extremely brave in baring their truths.

CAROL: It is all about empathy because we’re so divided and it’s all so divisive that In Northern Ireland we empathise with nobody and nothing. But it’s just not here, in every country where there’s cultural divides, it’s become very much “us and them”.

PAULINE: Particularly in a society like Northern Ireland where we grow up in segregated housing, segregated schooling you know, the theatre is a space where all kinds can come through the door and take their seat and sit with the intention of listening and hopefully learning. It’s up to us all to do what we can.

ROBERT: Not wait for politicians to do it for us. Can I ask then about criticism of the Peace & Reconciliation Process, people have described it as yet another layer of beurocracy.

CAROL: It doesn’t apply to what the Playhouse puts on stage, but in my experience by the time people get to the place where they’re allowed to or paid to speak they’re full of rhetoric, they’re now in office and they’re looking at the whole thing through some sort of different lens and it’s only the odd person who jumps up in the room and says “hang on a minute” in their own way, they are the only people I can hear the message coming through, it isn’t the people who have become managers, in a sense they have lost it.

PAULINE: For me, it’s the empowerment of the individuals who get involved in our projects. For ten years, people who’ve come through this verbatim theatre, telling their own truths, their own stories, have been empowered. Now they’re out and about delivering workshops to different communities and to different age groups. They’re making an important contribution, their story maybe will help somebody stop and think and look at somebody or a situation in a different way. That’s all we can do.

In response to questions raised by theatre workers and academics, Robert Rae (Director, Blood Red Lines), brought together Pauline Ross (Director and Founder of the Playhouse) and Carol Lamond ( Senior Psychotherapist in RAFT – Restorative Action Following the Troubles) to consider the role of theatre in post Conflict situations and ask is it Art or Therapy? 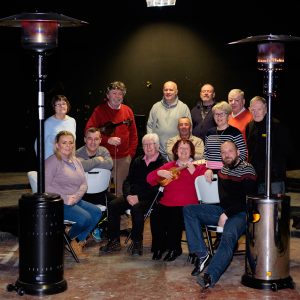 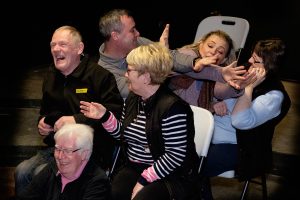 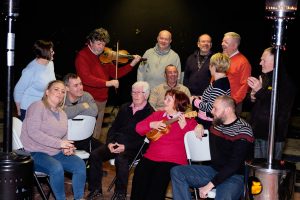 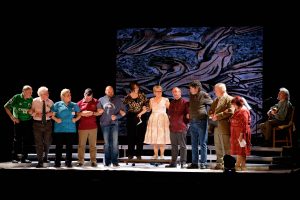 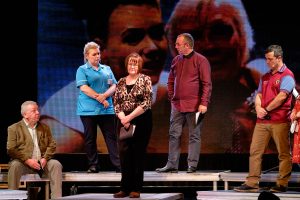 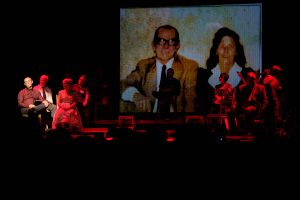