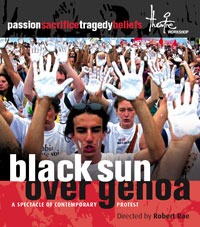 “There was a sense, on the eve of the giant Make Poverty History March and the G8 summit in Gleneagles, that this latest piece by Robert Rae’s company had found its time and place. Black Sun Over Genoa is a tremendous achievement”, Mark Brown in The Herald 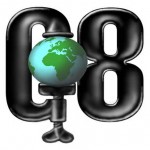 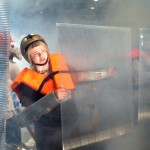 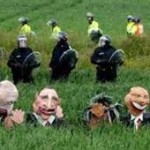 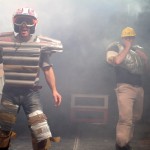 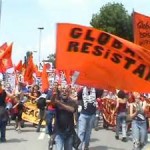 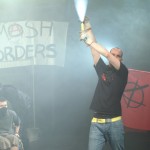 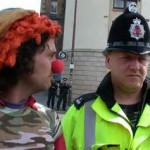 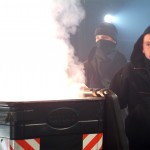 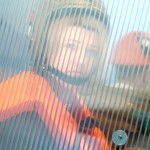 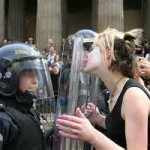 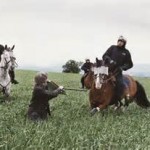 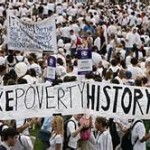 Performed to coincide with the 2005 G8 conference at Gleneagles, Scotland. Based on the 2002 work-in-progress, Nothing Ever Burns Down By Itself, it examines the experience of protestors at the 2001 conference in Genoa where a young Italian, Carlo Giuliani, was killed by police officers. It follows a variety of characters from radical Christians to anarchists, from the Clown Army to the communists. It becomes evident that such an event is attended by a wide range of different people with differing convictions and intentions. Due to this diversity, the play resembles a carnival with individuals enjoying their experience while making serious points.

However, the atmosphere of the protest changes when the demonstrators see the actions of the police. This finally culminates in the death of Carlo Giuliani. The police then attack the school where a number of the protestors lay sleeping and subject the people there to a terrifying interrogation. The play ends with the assertion that “I resist oppression here and I protest against oppression of people who do not have the freedom to protest” (56).

With its combination of dialogue, dance, song and direct declamation, this is a dramatic piece of vibrancy and dynamism. Performed during the 2005 G8 conference, this was a timely work that showed the ability of theatre to really engage with the key issues of the day.

“Rae’s real gift for creating theatrical spectacle begins to dominate the show.  Powerfully staged in the big space of the Festival Theatre, where the show flickers into real dramatic life, there are some beautiful and breathtaking visual effects and crowd-scenes, as the demonstrators advance in golden light from the back of the huge Festival Theatre stage to mourn Giuliani’s death”. Joyce MacMillan, The Scotsman 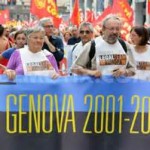 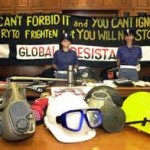 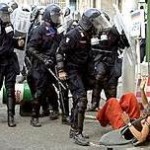 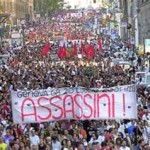 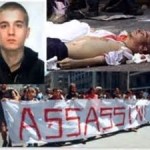